skip to main | skip to sidebar

How Big Are Those Pancakes? 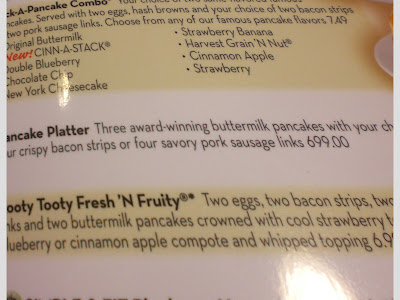 I forced my passenger to indulge at IHOP on our way to Kansas City last week. Although, his vegetarian meal of bowls of bagged salad and over-ripe fruit didn't look too appealing. I, however, truly enjoyed my eggs, bacon and pancake. I say, "pancake" because that was my concession to Weight Watchers. It was sooooo satisfying to taste that warm, buttery, syrupy, cakey delight. I think my pancakes are probably better, but I would probably eat the whole batch. Anyway, as we got back on the Interstate, I felt REALLY guilty and I'm pretty sure I felt my thighs expanding.
Posted by Mary at 2:40 PM 2 comments:

This character is wired to the post of the Railroad Crossing sign near my house. He's been there for about 6 weeks. I don't know who put it there but I'm surprised that no one has removed it. 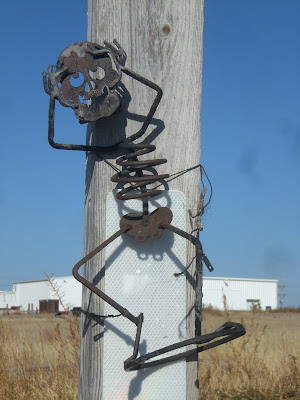 Seems like all I have to post about is the wind. Maybe you can see why, now. 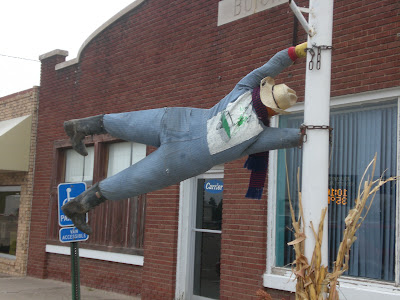 Just Another Day in Paradise

This is the view from my patio a couple of weeks ago. I had been working at the kitchen sink and happened to look out the window. I thought it was a grass fire and since the wind was blowing (again) 30 mph, I wasn't sure whether to get out the garden hoses or start hauling my photo albums and other treasures to the car. 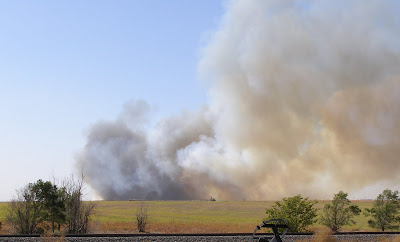 It was a scary sight. Amid all that smoke is a sunflower processing plant which could provide a lot of fuel for a fire. 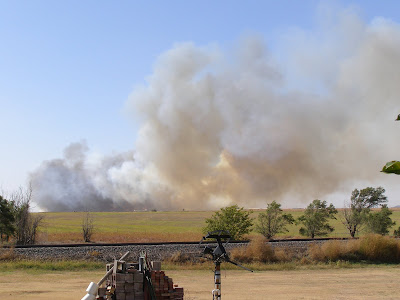 Here you can see a little hint of it. 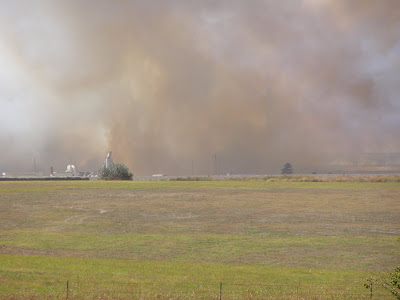 I eventually found out that it really was just smoke. The fire, which started in a cornfield, was nearly two miles away. A cigarette is the suspected source. The firefighters had it pretty much under control until it caught a pile of railroad ties. The newspaper said that a ditch was dug and the ties were pushed into it to finish burning. Evidently, if they were buried they could continue to smolder. 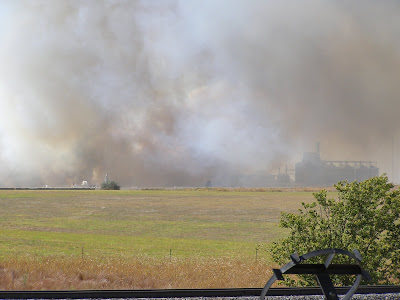 Have you ever noticed that photographing children is as difficult as herding puppies. It's a miracle if you get them all facing the camera at the same time. This bunch of rowdies are all 4 and under. As you can see, some aren't used to sitting in one place very long and some are hams for the camera. I picked the third photo down as the 'successful' one. 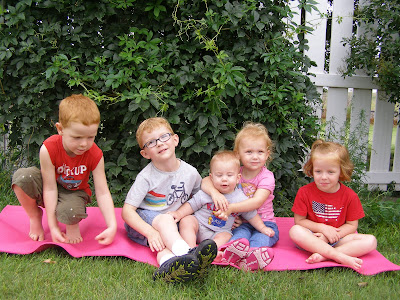 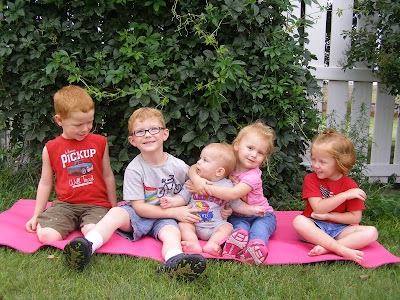 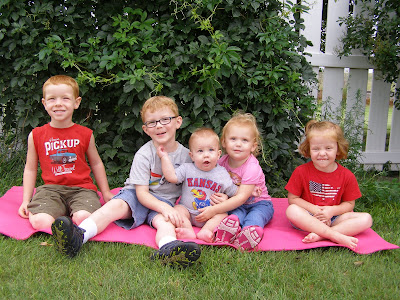 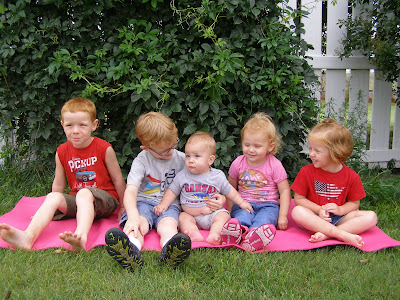 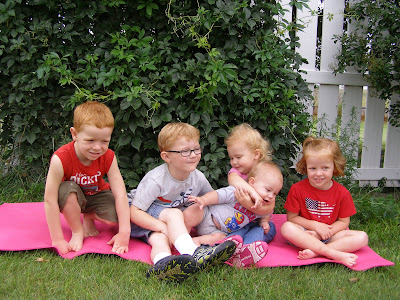 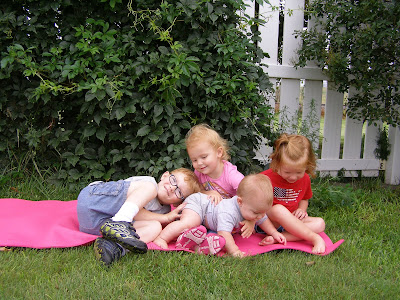 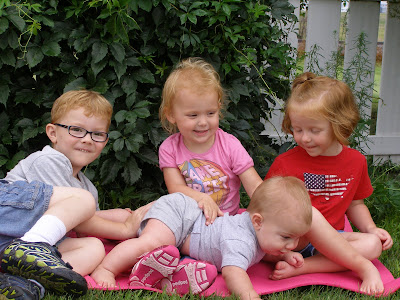 The last time I posted it was about wind and today it's still about wind. Today was a doozy, we've had sustained 35 mph winds with 50-60 mph gusts. I'm so tired of listening to the house creak and moan and wondering what's going to blow away.

The Interstate was closed for a few hours from here to the Colorado border because of high winds and reduced visibility.

I'm hoping it will slow down now that it's dark but the National Weather Service is issuing severe thunderstorm warnings.

The cornfield down the road from me was harvested last night before the wind really kicked up. That freed a lot of dried shucks to decorate my fence. The bright side is that the wind will blow out of the north before long and they'll go back where they came from.

I think this may be a good night to sleep in the basement. I'll relish the quiet. 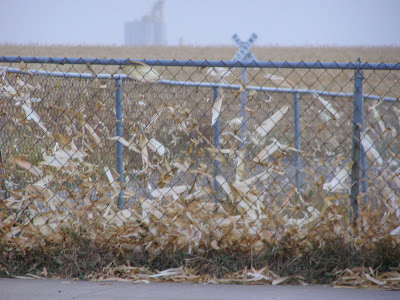 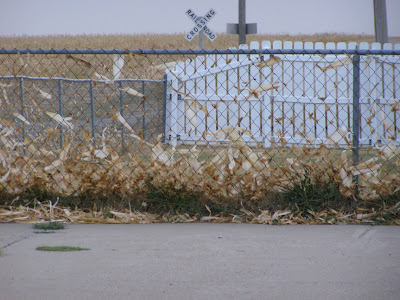 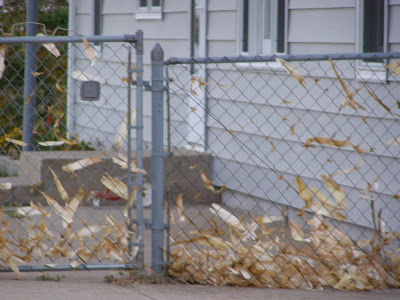 Back in August, I took a 'me' day and drove out to Colorado Springs for the day. Spent a few hours at the Flea Market, ate lunch at Olive Garden and drove back home with my treasures. I arrived to find that we'd had 70 mph winds while I was gone. My vinyl fence didn't stand up too well. 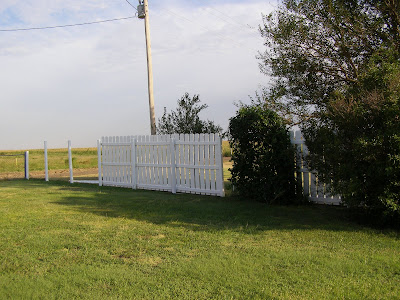 Several sections were blown out and one section I was lucky to find in the railroad ditch to the south. 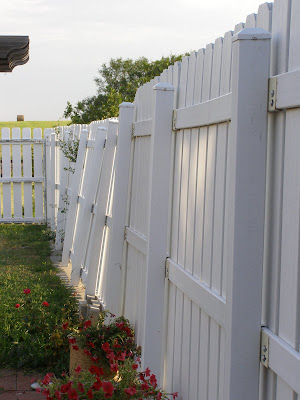 Some of the posts on the west were bent over. 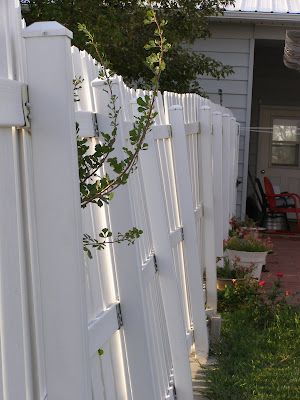 We put up this fence in 1999 and it's withstood similar winds, so I guess the posts have reached the end of their life. I'm going to replace them with steel, but all the contractors are booked up. The 'fence guy' said he couldn't get to it until next year.

My plan is to get as much of the work done as I can to save $$$ and make it a job someone might be able to do in one day. Then I hope to beg one of the contractors to do the 'small' job. If I can get them to set the new posts and pour the concrete, I think I'll be able to put the rest back together. 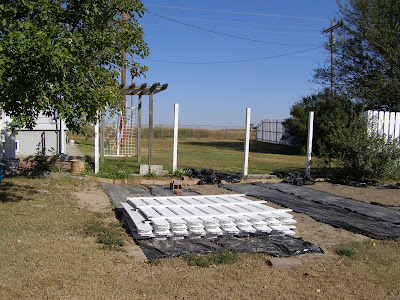 Purchased a diamond blade for the saw and cut the concrete on both side of the posts. 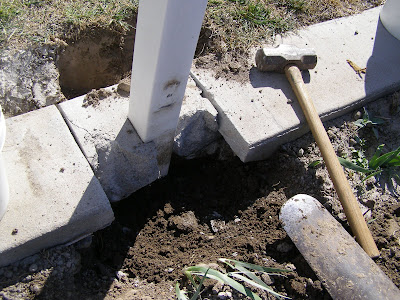 Smacked the concrete really, really hard with a sledge hammer. Actually smacked it many, many times,

The cuts helped everything to break away neatly. 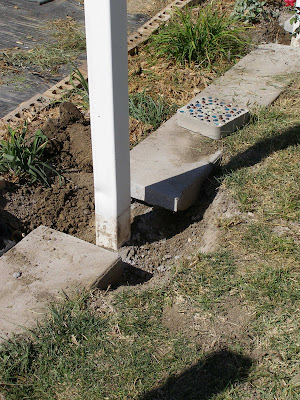 The new steel posts are painted and ready 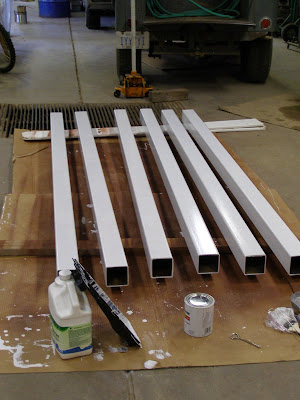 Now I'm waiting on the guy with the tractor to come pull out the bent posts. I've only called him 3 times and he was to be here yesterday at noon. I truly don't think that I have it left in me to dig them out by hand.
Posted by Mary at 7:11 PM No comments:

Mary
I'm a grandmother in my fifties, who likes to travel in an old RV. I started blogging in April of 2008 to chronical a month long trip I took in the motorhome to volunteer with Habitat for Humanity. I lost my best friend and husband to cancer in 2005. I began working with the Care-a-vanner's the following summer. I've met some wonderful people, made new friends, visited new places and helped to build 10 houses. I find it difficult to be idle, so when I'm home I volunteer at church, spend time with my grandchildren and work partime for a brokerage firm.